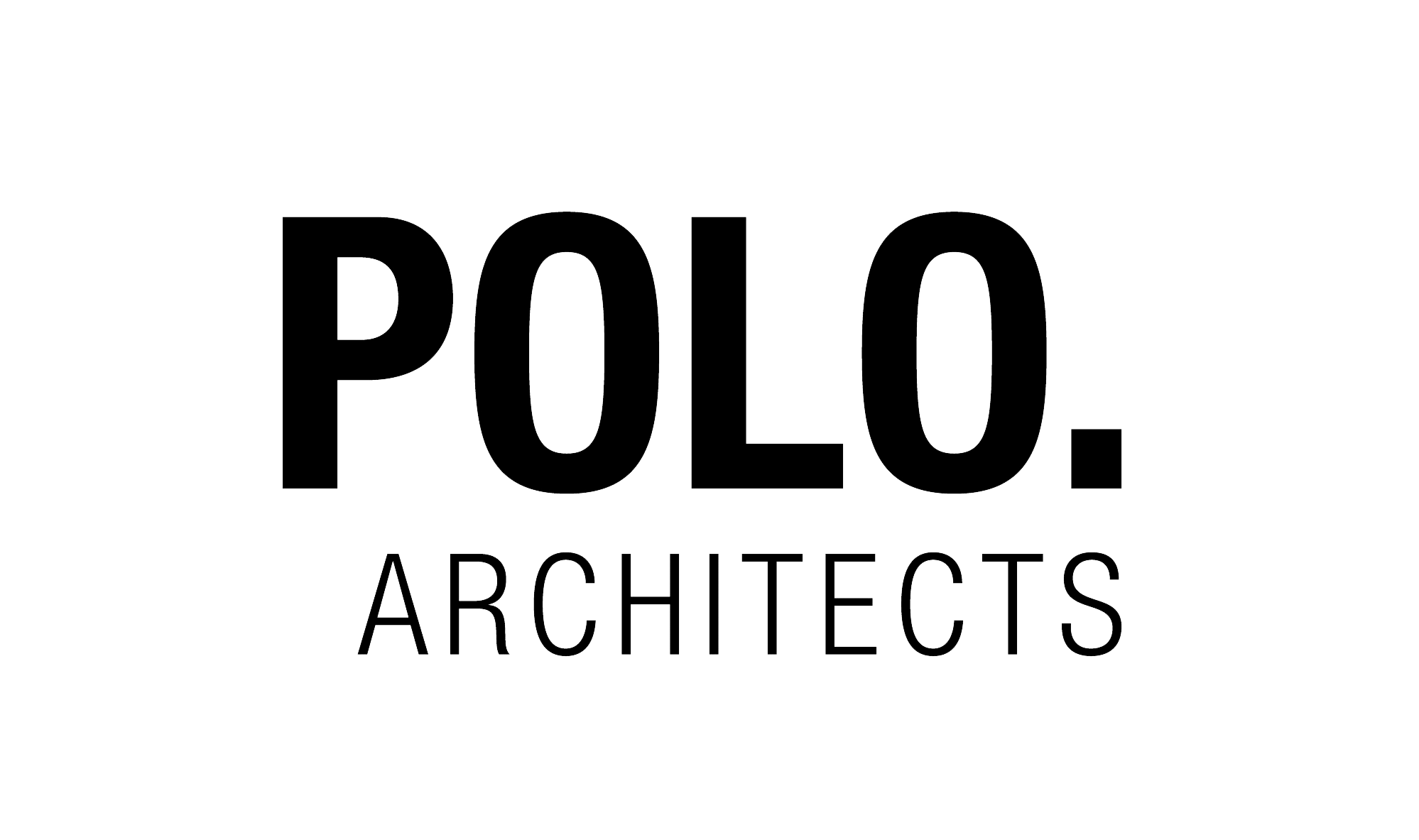 How POLO Architects cut mistakes and review times by 50%

In Edegem, a town just outside Antwerp, Belgium, an ambitious redevelopment project is underway. POLO Architects and partners are creating a new residential site next to the Hof ter Linden castle. The car-free neighborhood boasts a vast parkland, which connects to the adjacent castle grounds and is open to the public.

The Elysia Park project contains 345 residential units, from apartments to assisted living facilities, attracting residents of different generations. Every building offers views on the gardens, the ponds, or the park, thanks to clever planning and large panoramic windows.

The project is led by POLO Architects, one of Belgium’s leading architecture firms, specializing in architecture, urbanism, and interior design. Founded by Mauro Poponcini and Patrick Lootens in 1991, POLO architects has grown to become a multidisciplinary team of over 100 creative professionals with offices in Antwerp and Brussels. Over the years POLO Architects has built up a national and international portfolio, comprising competition-winning entries. 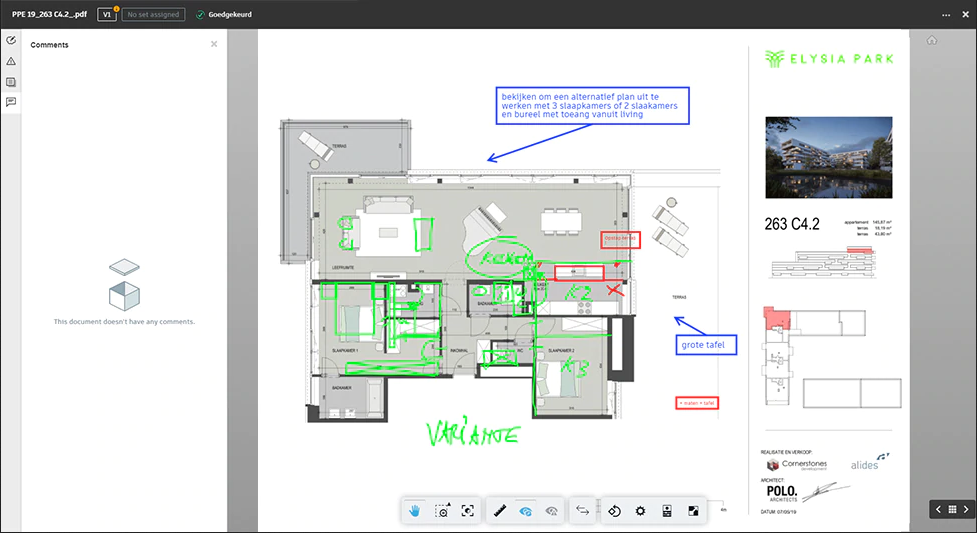 Looking for a better way to collaborate

The Elysia Park project is divided into four building clusters, realized in phases, one after the other. The project started several years ago, and during the first two phases, the teams did not use a collaboration platform.

“The BIM model used to live on our company server, and we would export it whenever we needed to share it with external parties,” explains Laura Rombaut, Architect and BIM model manager on the project at POLO Architects. “We would send the model through WeTransfer and wouldn’t know when it is used. The partner would take one or two weeks to get back to us, and by that time, the model might already be outdated”.

The customer would often make remarks by hand on a printout, and these would need to be transferred to Revit. Or someone would take notes in a meeting and incorporate them into the model later, with potential omissions or misunderstandings.

POLO Architects were keen to help their projects run more smoothly and started looking into collaboration software. Since they were already using Revit for modeling, BIM 360 Design was a natural choice.

“We did not look on the market for different solutions, we wanted to stay with Autodesk,” says Rudi Van Thienen, BIM manager at POLO Architects. “There was not much discussion; we just went for BIM 360 Design”.

The firm tried out BIM 360 Design on several smaller projects and was impressed with the results. So they decided to implement the solution at scale. And this is what they did for phases 3 and 4 of the Elysia project.

The project involves four key parties: the architects, the customer, structural engineers, and technical engineers. All are now collaborating on the BIM 360 platform. When the building contractors join at a later stage in the project, the plan is for them to use the platform, too.

“It was very clear to us that every other discipline working on this project had to use the same platform,” says Jan Cant, project architect at POLO Architects. “We were so keen on using the platform, we persuaded our customer and our sub-contractors to sign up for BIM 360 Design, as well,” adds Van Thienen. To help the transition, POLO Architects even created a tailored manual for the customer.

The new way of working

Having all the parties work together on one platform on such a large project for the first time has made a big difference. “The time we used to lose waiting for other modelers, for issue management – it’s all gone. Everything is in one overview. No more emails, no more uploading and downloading,” says Rombaut.

All parties always work on the latest version of the model, which prevents a lot of mistakes and misunderstandings. Instead of comments on paper printouts, there are digital remarks, seen by everyone in the project. “It gives us a much clearer overview,” says Van Thienen. If there were issues marked on a model in Revit, and the model gets updated, the issues get taken over.

The additional transparency means that if, for example, the client makes a remark intended for stability engineers, now the architects see it, too, and sometimes catch potential issues.

“We used to have so many meetings and so many mistakes,” says Cant. “Things would fall through the cracks, or there would be misunderstandings. Now it’s all on one platform. You can look at the same thing on the screen, ask the client, “Is this what you mean?”. It’s very different from the old way of working.”

“We estimate a 50% reduction in the number of mistakes, and in the time needed to complete some project stages,” says Cant.

The customer, two real estate development companies, appreciates the new way of working, too. “BIM 360 Design gives us the ability to look over the shoulder of the architects and engineering partners while they are designing, almost in real-time. We get a better feeling about the work that has been done and that needs to be done at any given moment, with the ability to make remarks and follow up on those remarks. It gives us better confidence as we plan towards construction,” says Jan Van Tilborgh, Project Manager at Cornerstones Development.

“BIM 360 is a very handy application to communicate at a distance with the different partners and study teams,” adds Alexandra Dierick, Project Manager at Alides. “It is helpful to keep an overview and it facilitates the follow up of the ongoing issues during different stages of a project. Of course, it demands a mind change for everybody using the applications, but in my opinion, the advantages will only become more important, especially now that teleworking is becoming the new way of working.” 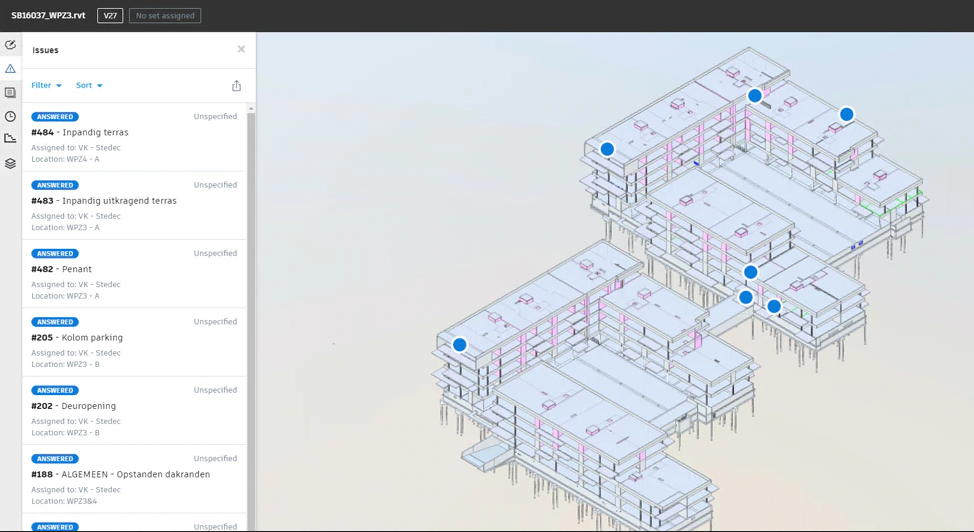 Besides a more efficient way of working, POLO Architects has seen other benefits. Reducing their carbon footprint is one. “Everything is digital, so we print less,” explains Rombaut. “We also have fewer face-to-face meetings. There used to be a regular meeting at the client’s place, which several people had to travel to. Soon after we started using BIM 360 Design, we canceled the meeting, because we could easily address the issues through the platform.”

And as coronavirus-related restrictions were introduced in Belgium, the team could continue their work uninterrupted from home thanks to BIM 360 Design.

POLO Architects now plans to use BIM 360 Design on all new projects that have external parties.